Register your church/business for 2022
Participating churches from past years

The Bell Tolls for Thee: 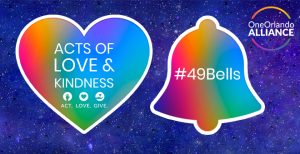 On Friday June 12, 2020, at 12pm bells tolled 49 times virtually, for the first time due to COVID 19, in unison around the world as a tribute to the victims lost during the Pulse night club tragedy. Mothers of the victims called upon churches, temples, synagogues, mosques and businesses to join them on social media this year by attending and sharing the virtual event and showing solidarity with messages of love and kindness on their public signs. Last year, the 49 Bells initiative was streamed on social media due to the current public health crisis caused by COVID-19 on the One Orlando Alliance Facebook page.

On June 12, 2016, a gunman entered the Pulse nightclub in Orlando, Florida killing 49 innocent people and injuring dozens more. The Pulse tragedy is one of the largest mass shootings in U.S. history and those victimized were primarily members of the LGBTQ+, Latinx and Black communities.

As the one-year remembrance of the tragedy approached, mothers of the victims launched an effort to find 49 churches around the world willing to toll their bells 49 times in honor of those taken.  In the last four years, more than 700 churches in 16 countries have tolled their bells. 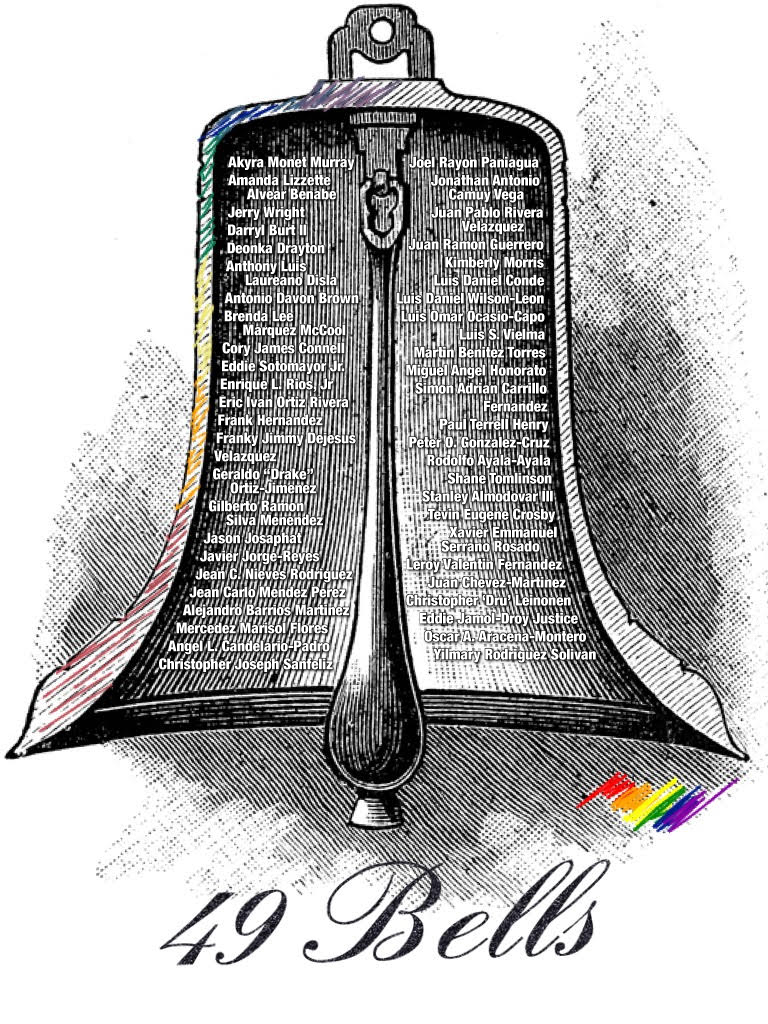 The tolling of the bells is part of “Acts of Love and Kindness,” a One Orlando Alliance movement grown out of the spirit of giving and good deeds witnessed in the aftermath of the tragedy at Pulse nightclub. The movement inspires the Orlando community and beyond to engage in volunteerism, share stories and show support through acts of love and kindness. Those participating in “Acts of Love and Kindness” are encouraged to share their stories on social media using the hashtag: #ActLoveGive

The 49 Bells ceremony was streamed via the One Orlando Alliance Facebook page at Noon on Friday June 12, 2020. The pre-recorded ceremony featured remarks from parents of those killed in the attack. Furthermore, the names of the 49 angels were read by Maria Wright and Fred Wright who lost their son Jerry Wright in the tragedy.

“Bells are sacred. We toll them for death and we ring them for celebration,” said Maria Wright, mother of Jerry Wright, 31 at the time he was tragically killed at Pulse Orlando. “Many faith traditions use bells as they resound within our innermost being. Jerry was a man of great faith and loved God and this was a purposeful way to honor his life, we are so grateful”.

“Hearing those bells was so beautiful and then seeing so many ceremonies posted to Facebook from other states and countries was just amazing, I know Amanda is smiling down,” said Mayra Alvear who lost her daughter, 25 on June 12, 2016. “This year, will be different but definitely however,  we need to continue to honor our angels and the virtual event will be an amazing way for the world to do that. This year, we’ve added an extra bell to remember not only all of those affected by the Pulse tragedy, but those who have lost their lives to COVID 19,” added Alvear.

To register your church/business for 2022, please fill out the form.

For the loved ones of those taken and as a united community at large, we ask you to join the 49 bells movement of love.

Zoom in for more detail

ONE ORLANDO ALLIANCE IS A COALITION OF LGBTQ+ SERVING ORGANIZATIONS TRANSFORMING CENTRAL FLORIDA INTO A COMMUNITY WHERE ALL LGBTQ+ PEOPLE CAN BELONG AND THRIVE.

Your ticket for the: #49Bells