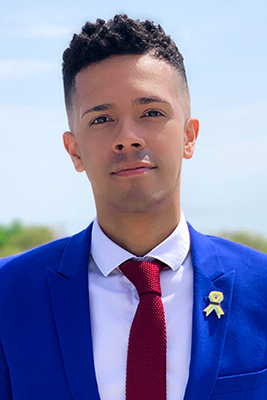 Brandon Wolf is a survivor of the 2016 Pulse Nightclub shooting in Orlando and national advocate for LGBTQ civil rights and gun safety reform. A regular contributor in print and television media outlets, he has dedicated his life to tackling injustice and amplifying the voices of marginalized communities. He is the co-founder and Board Vice President of The Dru Project, a nonprofit organization that creates safe spaces in schools for LGBTQ youth, provides college funding, and empowers champions in the fight for equality.

In 2021, Brandon was appointed to the United States Commission on Civil Rights’ Florida Advisory Committee, where he will work to inform future civil rights policy and enforcement of existing protections. He has served on the Boards of the Ban Assault Weapons Now campaign in Florida and the Pride Fund to End Gun Violence nationally. Brandon is currently the Media Relations Manager and Central Florida Development Officer for Equality Florida, the state’s largest LGBTQ civil rights organization.

ONE ORLANDO ALLIANCE IS A COALITION OF LGBTQ+ SERVING ORGANIZATIONS TRANSFORMING CENTRAL FLORIDA INTO A COMMUNITY WHERE ALL LGBTQ+ PEOPLE CAN BELONG AND THRIVE.

Your ticket for the: Brandon Wolf (he/him/his)